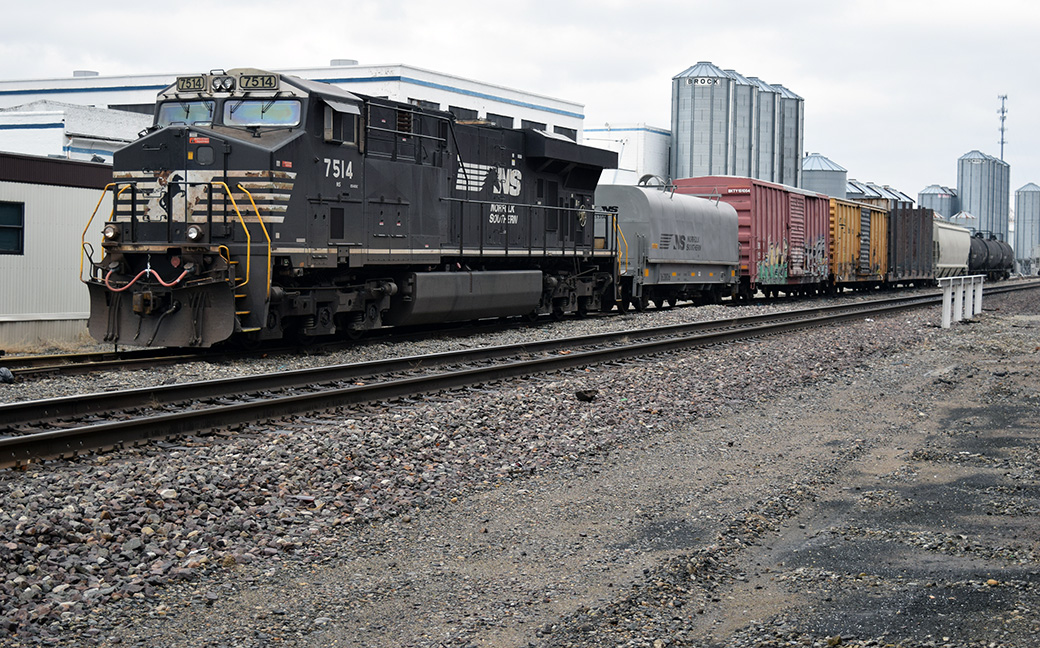 Patience, Familiarity and Other Stuff

The day after Christmas presented itself with record warmth and after a morning of errands and lunch, grabbing the camera and some fresh air was the order of the day. I wanted to find some new angles to my typical haunts and wound up at the crossing on 12th Street, where I parked in my usual spot and started looking around.

This is all too familiar ground where I’ve shot hundreds of photos and it’s easy to fall back on old habits, which is how I’ve felt lately. Maybe it’s the end of the old year, beginning of the new one thoughts swirling in my head or just the realization that things need a bit of a shake up. As I walked by the International Harvester warehouse, I photographed one of the loading doors for reference when I return to that project in due time. That done, what else might there be?

An ES40DC, No. 7514 and eight cars were idling on Industry Two awaiting Tuesday’s call to action (opening photo). Even though modern power isn’t on my modeling list, I decided to shoot a series of images just for practice sake. These were perfectly mundane photos, nothing noteworthy or different from hundreds of others shot with no particular objective in mind. Dissatisfied with the results, I ambled back toward the car when I noticed a fresh green signal to the east that suggested my timing might be rewarded if I could muster the patience to wait for whatever was coming.

Patience is a virtue I’m letting slip away. I’ve lost track of the times I’ve left a scene, only to hear an air horn mere seconds later. (Arrrgh!) I used to be able to deep dive into a good book for hours, but that simple pleasure seems harder to achieve too. It’s easy to use the Internet as a scapegoat for all our ills but we make the choice to squander our time and attention on useless things.

I have no idea what the green indication is bringing toward me or how long until the southbound arrives, so I decided to compose my shot ahead of time, knowing I’ll only get one chance. I found a spot where I could frame the picture with some tall weeds on the right and also include the equipment on Industry Two. It started to sprinkle, then rain steadily, so I headed for shelter of the car.

Sitting there, waiting, listening to the echo chamber that characterizes my mind, I wondered what I’m letting slip by with all the distraction and boredom I’m experiencing. I’ve been at odds with the craft for a while now and felt that more time by the tracks would be better than time in the basement but I’m having my usual doubts. Then it occurs that an opportunity is at hand and all I have to do is take advantage of it, so I begin to look around and take note of what catches my eye. Across the tracks on the other side of the street there’s a cluster of relay boxes and two containers that make a nice composition. The rain has stopped by now, so I get out and compose the shot. It wasn’t bad and with a little cropping in Photoshop, it became more interesting (below). Warming up my curiosity, I kept looking around while also keeping an ear tuned for any approaching air horn from the west.

The problem with the familiar is complacency. We’ve seen it all before and assume we know things when in fact, we’ve barely scratched the surface of what’s before us. When I take time to truly look, I’m amazed at the nuances I find in the ordinary. As often as I’ve looked at track, there is always more waiting to be discovered. The architecture of a composite rail joint, the manner in which pavement crumbles around the rail in a grade crossing, or how dirt and oil spray from passing trains creates a gradient of color on the ballast. Why do we become bored with this craft? I’m reminded that boredom is a state of mind we bring to an activity. We’re passively waiting for it to entertain or satisfy us, rather than exercise our ability to act and choose. We’re out of balance from being too focused on one thing; often an abstraction of some kind. The cure is to get out of your head and into the real world. I have a choice to assume there’s nothing new to be discovered, or to seek what lies hidden right before my eyes.

More satisfied with these images than the previous roster shots, I returned to the car to wait for the anticipated train that, I hoped would be along soon. After a few minutes the sound I’ve waited to hear comes from the west. I grab the camera off the seat and move to my preplanned location. The horn grows louder and the crossing gates at 12th descend as a stack train approaches with a vengeance. Looking over my shoulder to see where he is, I plan my timing and push the shutter button once, then again as a brace of Dash-whatevers roar past.

My timing with both shots wasn’t the best. I barely got the lead engine in the first and would have preferred a bit more space between the two trains in this photo but, I conquered my impatience this day and that felt good. As important as they are to the railroad and economy, stack trains don’t ring my bell the way good old fashioned mixed freight does, so I didn’t shoot any photos beyond the typical going away shot of the last car. It was unlikely there’d be anything else coming soon, so I decided to head home. It was good to get outside in weather that was a gift this late in December. It was also good to relearn the power of making choices.