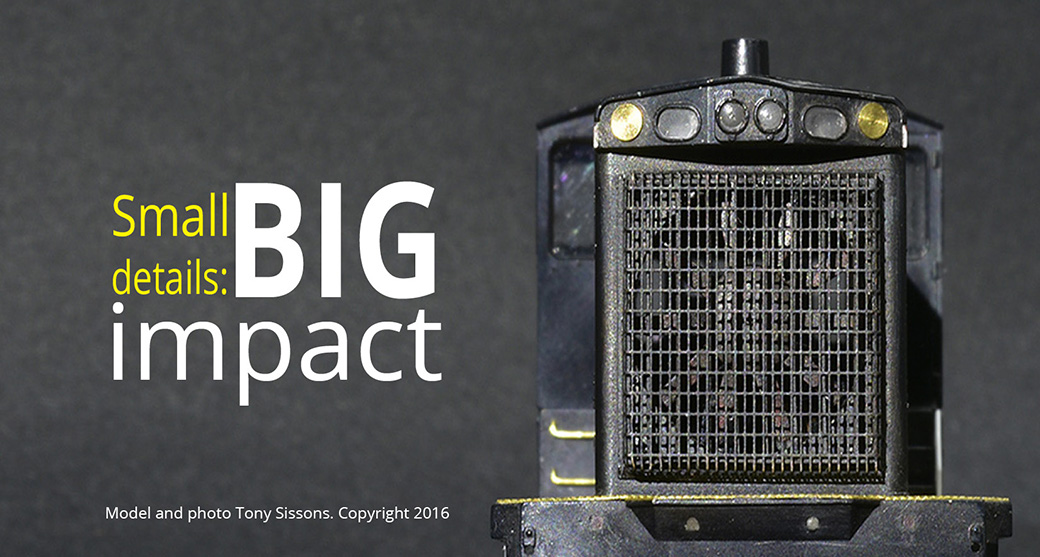 by mikeJul 26, 2016Modeling Techniques, Storytelling, The Art of The Craft, The Modeling Conversation6 comments

It’s no secret to you guys that I like fine details. My understanding of the world is filtered through such details. Yet I understand why people think my focus on individual details is misguided, when the objective is to have a large layout or an operations oriented approach. To get bogged down in a sea of individual details is at odds with both preferences.

I want to suggest that there is more to consider than individual details on a single model. While these are important for the quality they bring to a model, it’s also important to understand their impact as a part of the entire scene.

To my eyes, nothing screams toy louder than coarse, over-sized elements. I don’t care if it’s the cast-on ladders of a cheap freight car or window muntins that look like 2x4s, such grossly out of scale features ruin any sense of realism in the model. The full-size items don’t look like that, so why should we settle for them in miniature?

I apply the same question to scenery. Why do we accept out of scale tree trunks, fat utility poles, or loud colors of vegetation? We’re finally paying attention to rail sizes and ballast texture, even in the smallest of scales but, paradoxically, tend to ignore these items in larger ones where the visual impact is far greater.

I’ve featured the work of Tony Sissons (with permission) once again as an example of the impact small details have on our perception of a model. In the opening photo, Tony designed the safety grill for this SW1500 and had it professionally etched and he also scratchbuilt the large fan and the louvers you can see behind the grill. To his eyes commercial grillwork is too coarse and detracts from his enjoyment of the model. As a switcher moving a cut of cars slowly and deliberately, there is time to study the model, and the front of the loco is a prime target for the eyes.

For modelers like Tony and myself, such details are part of a chain of interrelated pieces that together contribute to the quality of the whole layout. A properly detailed loco, running on properly detailed track, through properly detailed scenery conveys far more realism than an out-of-the-box model on over-sized track through generic out-of-the-bag scenery ever would. Our eyes and minds know the difference between the two. We know when something doesn’t look right or when a critical detail, large or small, is missing.

It’s easy to look at Tony’s work and feel intimidated, thinking that it’s fine for him to go to such lengths because of his experience. This is a very real feeling we all have because of our tendency to compare the finished work of an accomplished modeler like Tony to our own in process mess. In doing so we’re not being fair to ourselves.

It’s more productive to look more closely at your prototype. If you’re genuinely serious about improving your skills, you need to consider the depth of your understanding. Do you really know the subject you’re modeling? Do you understand the relationship of one piece to another and how both influence the whole? Where your working skills are concerned, are the cuts well made, are the parts measured accurately? Is the assembly clean and tight? Answering such questions puts your focus on the work, which you can influence, rather than on someone else’s work that you can’t. Experience comes over time via lots of observation and exposure to the prototype and to fine modeling. In time your eye and judgement become more refined. Learning to see the difference between coarse and fine details, is within the reach of anyone willing to make the effort and OST Publications is here to help.