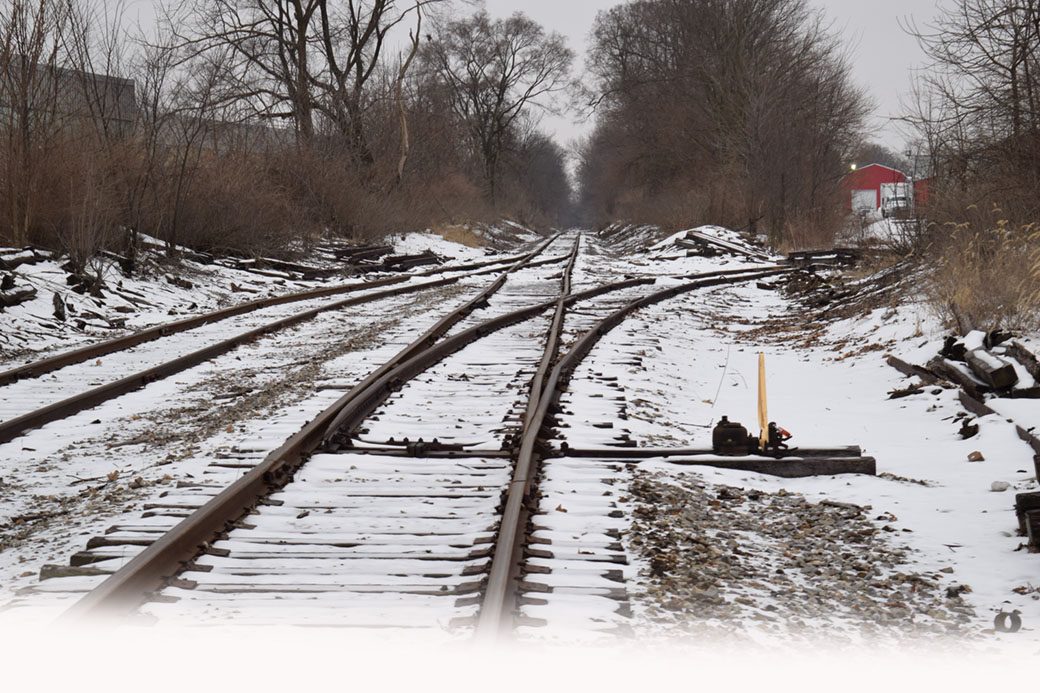 The Beginning Is Now The End

by mikeMay 17, 2016Pieces of The Puzzle, Storytelling, The Missing Conversation, The P48 Experience2 comments

Changing eras impacts the entire layout. It’s not enough to park a few old automobiles, swap out rolling stock or add vintage signs to a scene. One has to consider the entire story of a place and time. Many people are happy to fold, spindle and mutilate reality in order to create some “plausible” scenario that justifies a poorly designed layout. I prefer to ground my work in the real world.

Valley Junction is the beginning point of the branchline I model. I chose this location because it offered a greater variety of switching than anywhere else on the line.

Given the space I have and my desire for simplicity, modeling a yard, even one as modest as this presented challenges in quarter-inch scale. The truth be told, all I could feature was a tiny fraction of the track at VJ. The short run-around I included, because I felt I needed it, always looked odd for a yard setting and on it went. Needless to say, the concept gave me fits because it wasn’t working.

In the 1960s the infrastructure of the peak traffic years was still in place at many locations including Valley Junction. My original track-heavy design painted a more accurate picture of those years however, that volume of track leaves little room for other elements that provide the context needed for a well-rounded layout story. Having navigated that swamp already, I wasn’t about to wade back in, which led me to close the book on the Indiana & Ohio theme. What’s Next?
My criterion for moving forward is simple: I don’t want to rebuild the layout. I’ve toyed with that idea many times but just don’t want to go through the upheaval of another major construction project. In playing with the factory mock-up, I realized the existing track arrangement perfectly represented the end of a switching branch and that the ideal prototype was less than fifteen minutes away.

The Grand Rapids and Indiana was an independent line between its namesake locations. In the late 1800s Richmond was its southern terminus, with the yard and engine facilities located opposite the passenger depot on North E Street. The line was consolidated into the Pennsylvania as it expanded west during the early part of the twentieth century. Between Richmond and the Michigan state line, there are few major cities but plenty of small towns and farming communities. During the last century, the line saw mostly freight traffic and modest passenger movements, the most notable being a fall-foliage special to Grand Rapids, Michigan. By the 1960s traffic dwindled significantly and the line decayed quickly in the 1970s until the end finally came.

Today, Norfolk Southern maintains a remnant of the line to serve a Belden Wire and Cable plant that receives covered hoppers of plastic pellets. NS also has a storage yard at the nearby end of track. This location, with its modest operation and track arrangement, fits my criteria to a tee. I started by modeling the beginning of a branch, now I’m modeling the end of one, without driving a single spike.

The branch comes off the NS main, curves to the north and runs for a couple of miles until reaching the Belden plant. The track arrangement here is simplicity itself: nothing more than a passing siding and the spur into Belden. There is an abandoned siding that once served a farm co-op but that business dropped rail service before closing. Beyond the run-around there is a tail track used as a switch lead and storage yard, with the abandoned right-of-way beyond that.

The track on the layout is almost a mirror image of this location. However, all the elements are there with the character of the prototype. In this setting, my shortened run-around track feels quite natural as a place to shuffle a handful of freight cars about. I saw this relationship immediately when I mocked up the factory. Aside from adding the buildings, there is very little I have to modify with regard to the scenery, though I have removed the Cedar Grove feed mill model. Being such an iconic image of the I&O branch, I feel it’s an unnecessary distraction. Here we are looking south toward the NS main. We see the south switch of the run-around in the distance with the spur into Belden curving off in the foreground. This photo reveals the car spots and storage tanks. Space is limited within the plant. There are a number of pre-fab track and turnout sections laying about. These would make wonderful little projects. Finally, we’re looking north toward the storage yard at the end of track in the far distance beyond the Union Pike grade crossing.

I won’t have to modify any of the existing track on the layout, which is a great relief and time saver. The former interchange track will serve as the factory spur and run parallel to the branch rather than curve out at an angle. The Pole Track near the front edge will also remain in place and still serve as a catch-all team track. It will be a good place to park off-spot cars if needed or as a destination for something out-of-the-ordinary. This is the north end of the run-around just before the Union Pike crossing. Looking in the opposite direction, beyond the road is this storage yard full of old ties, grade crossing materials, tieplates and such. Notice how the pile of old ties and trees effectively screen the Top Gon hoppers. I plan to visibly stage a switch job as seen in this photo. Once the factory is switched and the train blocked for the return, the session is over. I’ll manually stage things for the next time.

As with the I&W, a layout this simple isn’t for everyone. It suits me just fine and demonstrates that one can enjoy the work with far less layout than the generic hobby claims is needed. The shift in era also shows me that one doesn’t have to scrap an old layout completely to find a fresh way forward.