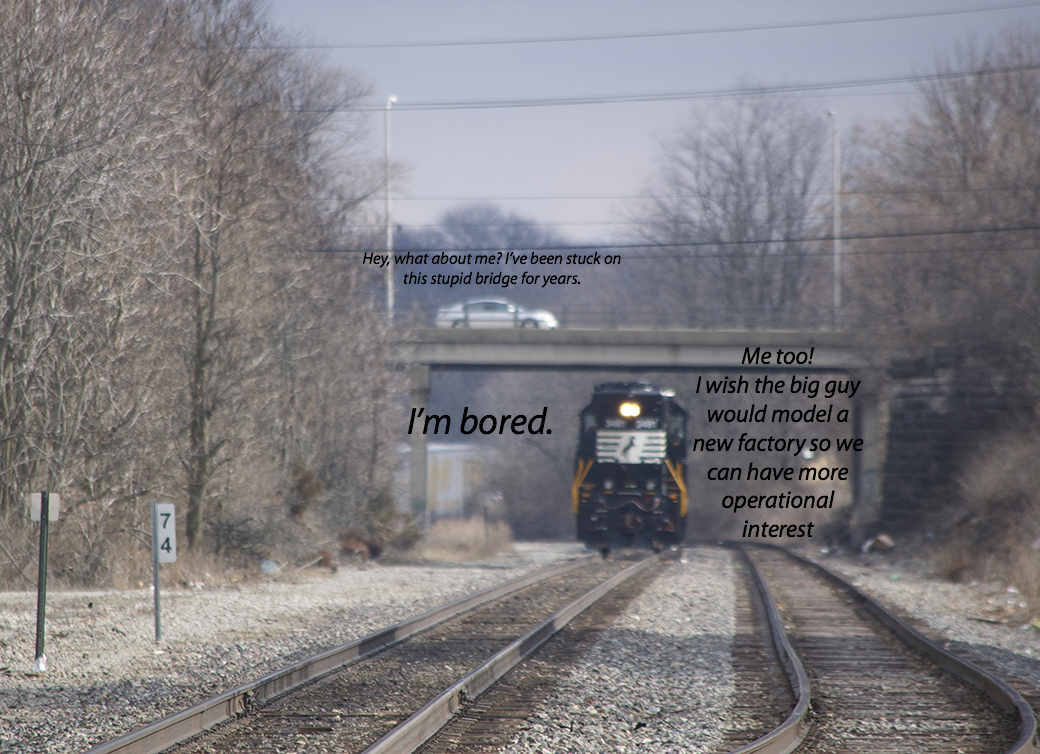 Imagine how the crew of the Norfolk Southern Geep feel. They were parked on the main waiting for clearance to move when I shot that photo. My watery eyes couldn’t focus the camera well because of the bone numbing cold on that day. Even though this is a light engine move, they’re getting paid to be out in the cold, taking that locomotive to someplace it’s needed in order to move real freight for real money. It’s commerce, not a hobby.

I’ve watched crews work Richmond many times. The work might be enjoyable or it might be boring, maybe even tedious. Regardless, they’re there to do a job and want to do it efficiently, without a lot of headaches. It’s work not play. They have to focus on what they’re doing because the stakes can be high, even fatal if someone screws up. The dirty little secret of full-size railroading is it’s repetitious and often boring. True, no two runs are exactly the same but they are similar more often than not. That’s not good enough for us though.

How many of you would like to go to Smedley’s basement, grab your time card, punch in on an actual time clock (because Smedley is a stickler for authenticity) and get your work assignment? No special snowflakes here, you do the job you’re assigned like it or not. You mosey out to find your power, do the routine checks and safety procedures, then wander over to find your train. You couple up, do more safety checks, and after an actual hour or more has passed (because there was a screw up somewhere), you finally get permission to leave. You think: “At last, now we’re talking.” You run to the first siding (which is only twenty feet away around the end of the blob), and the signal is against you. So you head in and sit there for the rest of the evening. Why? Because you got the division dog run of low priority freight. You get assigned the same job for the next three months. Sound like fun?

I get it, operations are the be-all and end-all for a lot of people. So much so, that some consider building the layout an odious price they have to pay before the real fun begins. I’ve never been a huge fan of formal operations and I part company with those who want us all to “model” jobs or work. When did that become a hobby? I do enjoy switching and running a model locomotive in a realistic manner. Beyond that…I’ll pass. My satisfaction from model trains lies elsewhere.

Operational interest is the Holy Grail we’re all supposed to chase.

Operational interest (however you define it) is the Holy Grail we’re all supposed to chase. It drives every aspect of our thinking from day one and boredom, in any form, is the dreaded demon we must exorcise and conquer. God Forbid we should ever become bored!

I embrace a radically different view. When I designed the I&W, I included too much track because like many, I never questioned the mantra of operational interest being paramount. A few years later, I removed twenty percent or more of that track because there was just too much of it. I was far happier with less. In fact, I was seriously considering reducing the size of the layout by at least fifty percent. I realized my true interests lay elsewhere and the layout was more of a burden to my enjoyment of the craft rather than an asset. That raw honesty led me to dismantle it completely with no regrets.

Why are we bored?
Why do people spend decades of time and thousands of dollars building these things only to “operate” them for six months to a year, and then chuck it in the dumpster and start over? Because they’re bored.

In my view, we grow bored because we expect to be entertained. We not only design the game board, we make up the rules when the real world procedures aren’t any fun.

We’re like the weekend duffer on the golf course who thinks the secret to a lower score is in the brand of club he uses, instead of what he gives toward practicing better techniques. We think that the secret formula of model trains is a bigger layout, more track, more trains, more operating potential; more of everything we can think of. And when we find out it isn’t, we chuck it all and start the insanity again telling ourselves we’ll get it right this time by golly. (These clubs suck. Maybe if I switched to Calloway?)

Boredom is a disinterested state of mind. We stop caring, stop giving of ourselves to something we used to care about. We happily engage in endless rounds of analysis paralysis, worried sick we’ll make a wrong choice and be bored with the outcome. Why is that? Full-size railroads don’t alter the track in a given location just because the crew is bored from making the same moves week after week.

What if we addressed the internal root cause of our boredom instead of blaming the external objects? After all, a few days, weeks or months ago we were slobbering all over at the potential this shiny new plan offered. Where did that enthusiasm go?

What if we stopped obsessing over how much track we can stuff in a given space, or how little we can get by with to stave off boredom and asked different questions? Like what do we expect this layout/operating scheme/model to do for us? What do we think we will have and, how will we know if we have it? Instead of passively thinking this craft will keep us entertained for a lifetime, what if we sought a new challenge? What if we approached it with the active curiosity of a student seeking mastery of a subject that captures his imagination?