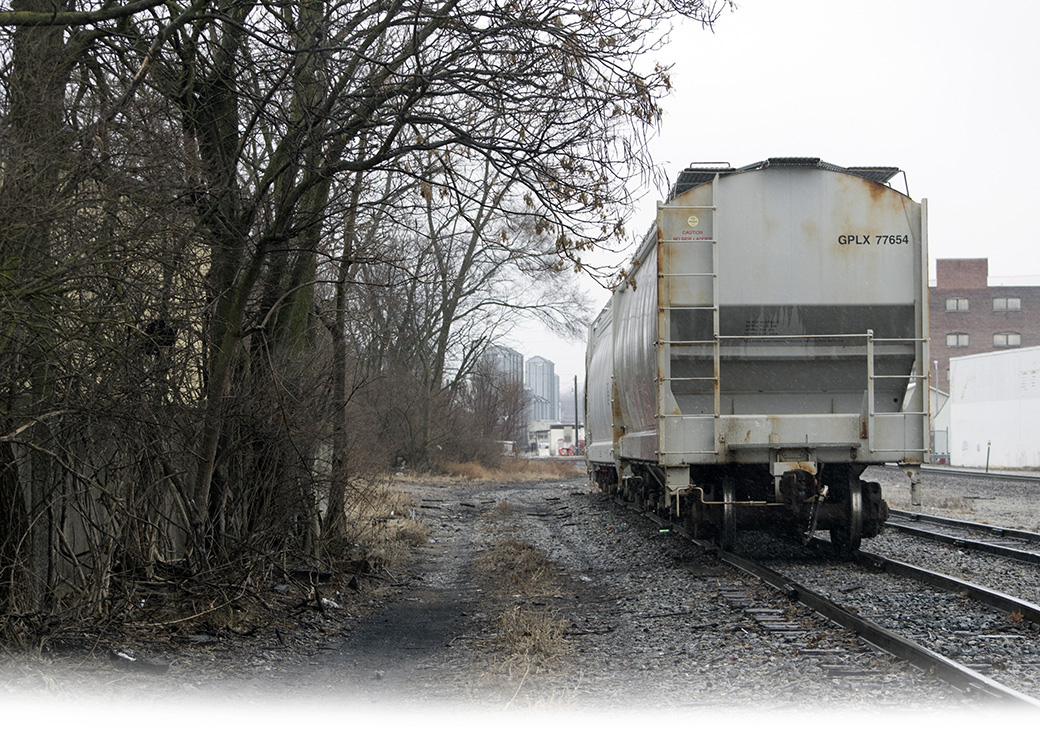 The Eyes See But The Heart Knows

by mikeJan 31, 2017OST Believes, Storytelling, The Art of The Craft, The Modeling Conversation1 comment

I keep coming back to this two track yard where Norfolk Southern sorts out the cars for Primex Plastics in the background. As mundane as it appears at first glance, there is something here that I respond to and I’ve learned to trust those hunches.

As a photograph this image has room to improve. Once again, I was shooting freehand while waiting on a southbound and I wanted to move around and shoot quickly when he arrived. To keep my mind occupied until then, I looked around and shot whatever caught my eye in an effort to better understand this spot.

I like this composition for the way the access road leads the eye into the scene thanks to the framing provided by the trees on the left and the rail cars on the right. Remove one or both of those elements and the photo falls apart. Looking down the length of the tracks instead of broadside adds a fresh perspective we seldom enjoy with a model. Overall, this is a simple composition with a sense of calm that allows you to study the image without feeling hurried to take it all in. While not to everyone’s taste, I find myself returning to it again and again to discover new layers of interest. It’s railroading I can understand and relate too.

As a subject for modeling, the tendency is to gloss over places like this in favor of the operations/entertainment value of the two tracks. That’s all many people will see and would relegate this scene to the background in order to have an unobstructed view of any main line action. Placed there, the scenery would be reduced to a non-descript mass of filler to hide the bottom of any backdrop. The access road would likely be compressed in width to save space or eliminated entirely. Another track would be more useful than a road, or so the thinking goes. While that’s all fine, it’s a shame to stop at such a surface level when there is more to explore.

I look at this image and see the potential of greater depths in both modeling and understanding it. I see a distinct place with its own textures and relationships, such as the way the track is a part of the surrounding scenery rather than separate from it. Exploring firsthand revealed the slight change in elevation between the track and access road and how the ballast spills over from one to the other. I’m also drawn to the colors of the winter grasses throughout. Even as a background scene, the trees and scrub growth deserve far more effort than a piece of scrubby pad and a haphazard bunch of twigs stuck here and there. If you’re bold enough to bring these elements to the foreground, a rich modeling challenge awaits you.

Looking at this photo, we each see it differently and will focus on a wide range of items. Some only see the rolling stock, others will bemoan the hoppers are too modern. Still others will be fascinated by it or bored to tears. I would venture to guess that many will only look superficially because we’ve been conditioned that way. Our shallow focus limits our vision in ways we don’t even realize.

The late American artist Andrew Wyeth spent more than a half-century exploring two small regions of the country. One was the immediate landscape around his home in Pennsylvania and the other a small community in Maine where the family vacationed in the summer months. These two specific areas and the people who lived there, provided him with a life time of subject matter for his paintings. It wasn’t that they were so unique, it was how he responded to them that made the difference. In stark contrast to the idea that you have to travel far and wide to find inspiration, Wyeth brought inspiration with him by being open to the things that interested him. He knew what he responded to visually and had no trouble finding it in the landscape or a person’s face. He also understood that to capture the essence of a subject, he had to know it intimately by returning to it again and again, each time discovering a different aspect of it. He had no need to go looking for inspiration, he was surrounded by it daily.

I don’t have a pressing need to model this location. It’s enough to study the area and tuck the lessons away for now. I will revisit this spot many times and let my curiosity about it take me where it will. When it comes to understanding why and how I relate to railroading like this, I haven’t even scratched the surface yet.