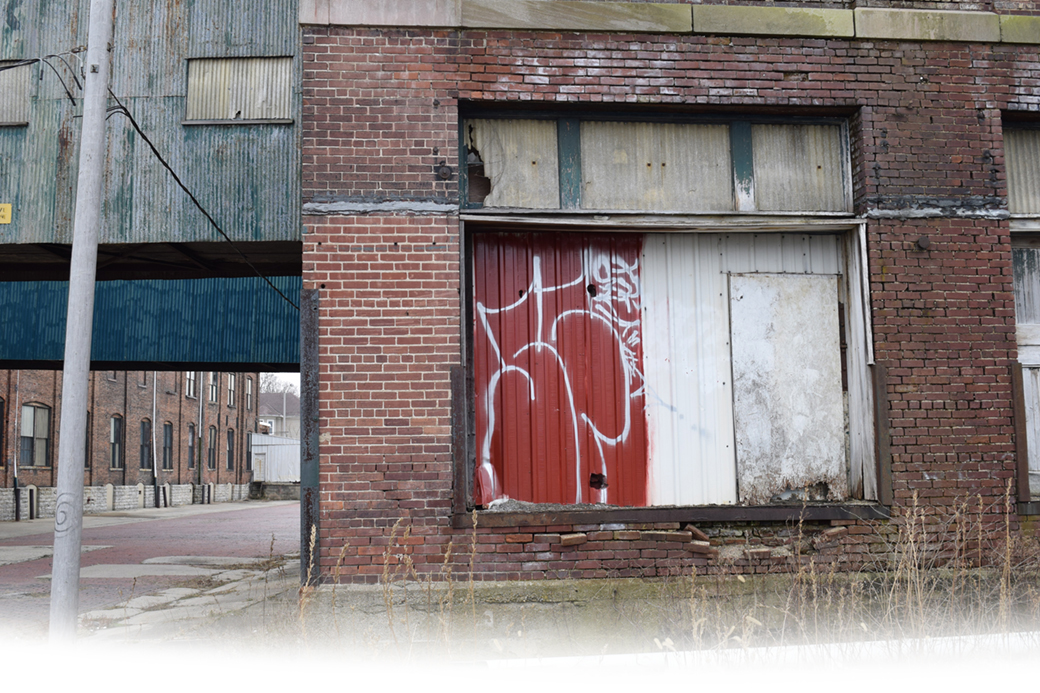 On a day I should have spent at the keyboard, my mind turned to mush. Whenever I get stymied with writing I’ve learned it’s good to do something physical. That was the case here and I felt the need to get out of my head and work with my hands, so I tackled a project I have been mulling over for a while.

Earlier this year I started work on a large warehouse model. My first attempt was a failure but provided good lessons for the second one, seen below. Due to my growing indifference toward the old layout, I went cold with the project during the summer and let it sit until recently. Looking at the model with fresh eyes revealed a major mistake on my part, though not a fatal one. As you can see from the opening photo, the loading doors have a deep setback that I didn’t allow for on the model.

This had to be fixed and I imagined it would entail a mammoth amount of work to do so. The substrate here is two layers of 0.040″ styrene. I used two layers to provide a setback for the upper story windows between the pilasters that form the sides of each door. However, I didn’t give as much thought to the doors themselves. I know from experience that cutting through thick styrene with a knife is tough, even with a fresh blade. A single 40mil sheet is bad enough but two sheets would be an exercise in frustration leading to an outcome I wouldn’t like. In an all too rare lucid moment that proved to be a good choice, I decided to take the quick and dirty route and hog out the bulk of the material with a cut-off disk in my rotary tool. The work went smoothly and I had the waste removed in short order. Initially, I left a healthy margin around the openings out of fear of damaging the brick sheets. After the bulk of material was gone and, having gained a bit of confidence in handling the tool, I went back and trimmed away more material in order to reduce the amount of file work required to clean and square up each opening with the brick sheets. This is a large model, so I’m building it in two sections for ease of handling and so I can fit it on my workbench. Since I’ve repurposed it from the old layout to the 13th and North E scene, I’m rethinking the building’s proportion in the new setting. I need to consider the composition of the entire scene and how the features balance each other. Making the warehouse full-scale height would make the scene almost as tall as it is wide. My thinking is also driven by the position of the LED strip light. Mounting it too high will effect the quality of the light in the scene and the amount available to illuminate the front of the rolling stock. I want to avoid the “high-noon” effect at all costs, so I’m considering eliminating one building story to reduce the overall height of the entire scene.

With the door openings fixed, I can move ahead with the model. Once it’s placed, the scene will change dramatically and I’m eager to see it shape up.